Why Hillary Clinton Should Be Investigated by Special Counsel 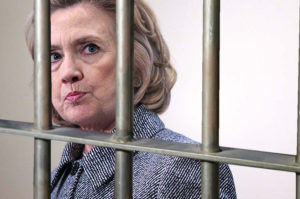 President Donald Trump apparently wants Hillary Clinton jailed. He’s been saying it since the early days of his 2016 presidential campaign, often joining in the throng of chanting fans and political zealots shouting, “Lock her up! Lock her up!”, all while pretending to lead the band with an invisible conductor’s baton and that big, knowing smile on his face while the crowd screams the mantra over and over and over… So there’s that.

ASIDE FROM THE FACT that calling for political opponents to be jailed actually puts us now in league with despotic nations like Somalia, Nigeria, Syria, Venezuela, Russia, and other countries where exceptionalism and political maturity are foreign concepts… the amount of sheer hate and division that oozes from the pores of such mob rhetoric is exactly the fuel that launches dictators, despots, and tyrants from an otherwise sound democracy.

Recently, President Trump, along with Attorney General Jeff Sessions, has openly discussed the possibility of appointing a special counsel to investigate the story behind Hillary Clinton, Russian purchases of American uranium, and $145 million in Canadian donations to The Clinton Foundation. As you can imagine, this really got the bottom of the GOP base giddy with delight. After all, President Trump said that “is the real Russia story”.

WHAT HAPPENED: Uranium One is a Canadian mining company that conducts operations in several countries, including the United States. In fact, Uranium One holds mineral rights to American uranium, and the company’s production capacity allow it to process approximately 20% of the uranium in the U.S.

Anyway, in 2010, a Russian state-controlled company called Rosatom (which controls all aspects of Russian Nuclear Power) purchased a controlling interest in the Canadian mining company (Uranium One). Because the proposed sale would include the ‘purchase’ of American uranium by a foreign entity (Russia), the sale had to be approved by a committee in which Hillary Clinton was a member (the Committee on Foreign Investments in the United States). Hillary Clinton, along with other members of the committee, approved the sale unanimously.

None of this would sound necessarily hokey (considering that under terms of the deal no U.S. uranium would ever end up in Russia, because the Russian company simply bought shares in the Canadian mining company), except for the fact that some members of Uranium One’s biggest investors ended up donating $145 million to Hillary’s pride and joy: The Clinton Foundation. Suddenly questions were (naturally) raised about whether Clinton’s membership and approving vote to allow the sale was influenced by the mega donation by the company which benefited the most from the completion of the sale.

Yikes. Sounds pretty damning when you write it out like that, doesn’t it?

If, in fact, Hillary’s “yes” vote within the Committee on Foreign Investments in the United States was influenced by the receipt of such a large donation to her foundation, then clearly that warrants an investigation into possible graft charges. If for nothing but the sake of sheer propriety, an investigation should certainly be required.

WHILE I PERSONALLY BELIEVE that the approval and sale, along with the foundation donation were completely legit, I still believe that Special Counsel should be appointed to really dig into the heart of the story. I’ll explain why in a minute. First, I’d like to include a few omitted facts from the synopsis above, which actually help shape the picture of what may have actually happened.

First of all, there were nine senior government officials on the Committee on Foreign Investments in the United States, including the secretaries of State, Defense, Treasury, Homeland Security, Commerce, and Energy, the attorney general, and two White House representatives. They all unanimously OK’d the transaction in 2010.

Secondly, the vast majority of the $145 donation to The Clinton Foundation was made by a single investor named Frank Giustra, and the donation was made before approval of the sale was even made by the committee. Furthermore, another (YUGE) omitted fact is that Frank Gustra sold all of his shares in Uranium One approximately 18 months before Hillary Clinton was even confirmed as Secretary of State. So quite simply (and as far as we know), there would have been no reasonable motive for Giustra to have made the donation as a means of “greasing the wheels” of a proposed deal that would have only benefited a company in which he held absolutely no interest. Yes, Giustra was a “major investor” in Uranium One, but that was (in political reckoning) “ages” before the issue even landed on Clinton’s desk for approval.

WHY SPECIAL COUNSEL SHOULD BE APPOINTED

First of all, the nature of the deal and the questions it posits would reasonably raise eyebrows in any political environment, regardless of a person’s ideology or party affiliation.

Secondly, if no wrong was done, no wrong will be found. If the deal is as squeaky as the Democrat cheerleaders say, then there should be absolutely no heartburn by anyone for an investigation to go forward. In fact, if all of the facts have been exchanged, then the investigation should be relatively quick and painless.

Thirdly, when Democrats push back against the idea of transparency when it comes to investigating ourselves, then we have no moral high ground when it comes to pushing for the investigation of possible crimes and ethical violations by members of opposing political parties. We lose credibility when we do that. Further, no one person (Hillary Clinton) is bigger than the ideals and platform of the whole Democratic Party.

Another reason that appointing a special investigative counsel would be a good idea is that would effectively diffuse the hostage situation that Trump has caused, by holding in front of America the threat of such a move. If Democrats refuse to “care” about the hostage being held (essentially killing the hostage ourselves) then that places Trump on a level playing field and removes any leverage that holding such a hostage would create. So let’s kill the hostage, and call for special counsel ourselves.

Lastly, I’d like to share a quote by my good friend, Danny, who once said, “those who profess to love the truth, cannot be afraid of the truth”.  So let the truth lead where it will. After all, it’s the truth. If Hillary has done nothing wrong, we will all benefit from the investigation having revealed the truth of her innocence in this matter. If, however, such an investigation leads to other things for which she may have to answer, then we will all be better having brought it to light by our own calling… rather than having the investigation forced upon us by political opponents who will gloat about it for years.

The mark of a thoughtful and reasonable person is most easily seen when displayed as a willingness to adhere to the concepts of our inherent sense of justice. We need to fight the urge to check our conscience at the doors of voting booths. We need to stick to our principles of self-governance by being willing to be held accountable by each other. Hypocrisy in any form is an ugly thing… but when we, ourselves, become the practitioners of hypocrisy… that is the ugliest thing of all.