Things That Blow My Mind: Rain and Weather 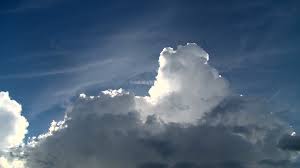 I’ve always been fascinated by weather.  And sometimes, when I visualize the process of precipitation, it literally bakes my noodle.  I realize that precipitation is something we’ve all grown up with, and by and large, we don’t really give it any thought, aside from simply acknowledging whether or not it’s a rainy day, or a sunny day.  But there’s so much more to it than that, and it freaks me out! 🙂

I live on the Gulf Coast, where there’s lots of moisture in the upper atmosphere as the hot, ocean air rises.  And during the summer, we often see pop-up storms in the afternoon after the air heats up really good. The rain clouds literally seem to appear out of nowhere at all.  These aren’t storms that have been moving across the country for days. These are storms that don’t exist one moment, then seemingly appear out of nowhere, drop 15 minutes worth of significant rain, then disappear again. The phenomenon blows my mind, and the answers to why it happens fascinates me and fills me with wonder and delight. Well, here’s my attempt to explain how this all works and why it intrigues me so much.

Next, we all know that hot air expands and cold air contracts (shrinks), and that’s because the air molecules are closer together when it’s cold, and the air molecules are farther apart when it’s warm. In a warm air pocket (just like our empty sponge) the empty space between air molecules is just the right size to allow water vapor to collect and linger.  The water is comfortable inside it’s cozy empty space and has no need to be anywhere else. As long as the air stays warm and expanded, the water will remain.

It doesn’t take much of a high-altitude drop in temperature, however, to make the air squeeze a little and release whatever water it’s holding (just like when we squeeze our kitchen sponge). When the cooler air molecules contract and get closer together, it removes the empty space, and the water suddenly has nowhere to be, and falls out of the clouds as rain. Once the air warms up again, later, the empty space returns between the air molecules and is ready again for a refill.

I realize this is a simply concept, but being able to actually visualize it is satisfying and fascinating to me. The warmer the air is, the more water it holds. The warm, moist air rises very quickly into the upper atmosphere and eventually hits a plane of much cooler air, causing the moist air to constrict and release whatever water it’s holding.

I can’t explain why, but this blows my mind.