QUESTION: Where do you stand on Morality after Mormonism? 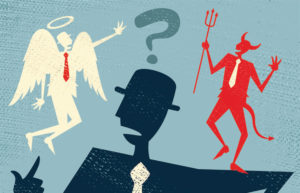 Without religion, what forms the basis of moral judgment?

QUESTION: Where do you stand on “morality”? After Mormonism… what became the basis for your ideas of morality?

Pattrick:  It took me a while to flesh it all out. But I finally think I found the basis for my moral compass since I no longer look to religion, scriptures or group pressure to determine what constitutes moral behavior.

Then again, the risk is huge. I love my wife. In fact, I adore her. She’s my life-partner, and the one I look to when I’m feeling down. She’s an amazing person. She means everything to me. My family, my wife, my life, my mortgage, my home, my way of life… could all be in jeopardy if I was ever caught cheating.

The risk truly outweighs the benefit. Not a wise choice. Not a moral choice.

ANOTHER EXAMPLE: STEALING. There’s something I want. I have the opportunity and the motive. But if I’m caught, I could get in serious trouble. It could mean the complete upheaval of the way my family and friends see me. It could cause them serious distress. If I get in legal trouble, it could mean bad things for my family, financially and socially. The risk probably seriously outweighs the benefit.

Not a wise choice. Not a moral choice.

BOTTOM LINE: If personal actions lead to bad results and negative consequences, especially for others for whom they have no control over resultant events stemming from your choices… then that is an immoral decision. It’s not wise. It doesn’t help you individually, it doesn’t help others, and it’s potentially bad for your loved-ones or social group. “Immoral”.

That has worked just fine for me for the past decade or so.

In short… we don’t need an invisible man in the sky to dictate to us what’s “good” or “bad”. Pretty sure we can decide that on our own.

Kim: Yes, like you I feel like once you take religion out of it do I really think it’s that bad?.
For instants, do I care about how many sexual partners one might have before marriage or just in General? The answer is no. When before the church would tell me that person is a siner. And even though they repent their reputation would still be tainted. Which is just a load of horse shit.
I still think cheating on your spouse is terrible. Hurting someone so deeply in that way is unforgivable. The risk is still to risky.
About 8 years ago a wise person once told me… Religion isn’t what matters, being a good person is the only thing that matters. It’s something I’ve never forgotten and I often think about.

I don’t want to lose ones good opinion of me. And would never doing anything so stupid as to lose my family. I’ve seen first hand with a family member of mine and how his lack of self morals has cost him everything. His wife, his kids, his job, his once good reputation, we siblings that don’t want much to do with him, and now my parents are getting tired.

I guess what I’m trying to say is this, my ideas on morality aren’t as high as they used to be when I was Mormon. But I still think there are some lines in the sand that you can’t cross if you want a happy life. I don’t need church to tell me if I’m a good person. I think I can figure that out on my own.

Pattrick: Kim… I would say that since leaving Mormonism my ideals of “morals” is actually much higher.

Instead of wanting to not steal to please some invisible man in the sky, I’ve decided on my own that it’s probably not a good idea and would probably risk the destruction of my life and family.

As far as sex goes… who cares???? We’re human beings and sexual desire is as much a human biological function as burping, farting, pooping, breathing, eating, etc. It’s just what human do. lol

So to be clear… I think it is far better to attach morals to simply “wanting to be good for yourself and your family”, rather than wanting to be good because you’re afraid of offending some invisible bearded sky-person. lol.

If you’re faced with a problem and really think it through… and decide that it’s a good idea without regard to what some “god” would think… then chances are, it’s a good idea.

Nancy: Most words I can think of such as “moral” and “wise” are so subjective. I suppose my compass is “do no harm”. I lie to my mother almost daily and some times several times a day. She has Alzheimer’s and to answer all her questions truthfully would make her so sad. I have no problem with anything consenting adults chose to do. Who am I to judge? LIke you Patrick, I no longer have any answers. I now walk the same road all my fellow travelers on this planet do. I no longer travel the high road. It feels wonderful. I don’t have to have the answers. I no longer suffer from the dellusion that I some how approach life from a superior position made possible by being endowed with eternal truths. My life has no meaning unless I chose to attach some to it. However, that I exist as a human being on this phenomenal planet is one of the singular most amazing things I could ever contemplate. I find it astounding, especially that my existance is a completey random fluke if you will. How is it that in all the vastness of space and time, I get to exist? Amazing!

Mark: I have to agree with Nancy on the ‘do no harm’. On the one hand, it’s great to be loving, kind, and helpful. On the other hand, one of the first real lessons we learn in life, if you decide to treat people badly… ‘what goes around, comes around’. (I think there really is something to Karma.) So, why the hell would a reasonable person ‘lean into a punch’. The Golden Rule is just common sense. As far as morals go, we’re back to the ‘do no harm’. What two consenting adults do in privacy is their business. So, if we’ll just make it a habit of maintaining a positive mindset, and give people the benefit of the doubt, and not be quick to judge… we should do alright.

Pattrick: I do think “moral” is very subjective. However, I think “wise” could be defined as simply making choices that result in positive outcomes. So to me, if a choice results in a positive outcome without encroaching on others, then it’s a wise choice. So the “do no harm” standard is definitely there.

The amazing thing here is that we each get to wrestle with our own individual ideas of what forms our moral compass, rather than doing mental gymnastics and using the church’s one-size-fits-all definition.

And to the extent our own ideals of morality lead us to happiness for ourselves, those we love, and those without our spheres of influence, then how cool is that!?

Nancy: Some human being are amazing. Others, not so much. It’s great to be in a place now where I don’t have to love them all. I don’t even have to like them all. Better still, I don’t have any overwhelming celestial mandate to save them all.